At the corner of West 15th St and Nicollet Ave, across from the Music Box Theatre, sits  The Nicollet Diner. Opening after at least a year of renovating the location, I was really excited to try a place so close to home. Sadly, the two times I visited The Nicollet Diner were supremely disappointing.  The opening weekend the waiter told us that breakfast was not being served. Since that is what I came in for I decided to try them again.

Three weeks later I tried again, thinking that they would have worked out the kinks in opening a new business. I was wrong. I visited on a nice sunny day in October at about noon hoping to catch a late breakfast. First of all, they do not have window treatments or blinds or awnings, so I came at the perfect hour where the sun was blinding and hot from the south windows. I was seated and the waiter did apologize and explain that the windows would receive coverings soon. Drinks were ordered and at least 10 minutes went by before receiving my hot coffee in my hotbox seat.

One hour (almost exactly) did it take for food to come out. The place was busy but not full. During this hour wait I was not offered to be moved from the blazing sun nor was I brought any water. It was the most uncomfortable wait in a restaurant that I have ever experienced. The wait staff looked confused and frustrated. I honestly don't think any of them had ever served tables before. The cooking staff looked just as confused and frustrated. They really need to figure out how to use their little counter bell. I heard it ring but no food was actually taken and it just continued to frustrate the servers.

When the food came it was an insult upon injury. The hash-browns were undercooked, the cheese was not melted, the eggs were over cooked, and all the condiments came from a tube. I could have made a better breakfast at home and in a fraction of the time. To try to remedy the situation a manager was circling the diner apologizing to tables and trying to sell them on their upcoming 24 hour service. I'm sorry, but a cut in my check and a desperate request to 'try us again' will not get me back into The Nicollet Diner for at least another year. Unless they gets their act together I will be surprised to even see them open in a year.

The Best Part: I didn't die from the heat or the food.
The Worst Part: I would give a lower review rating if I could.
Labels: dinerdykes minneapolis nicollet ave nicolletdiner reviews the Nicollet diner uptown
Location: Loring Park, Minneapolis, MN, USA 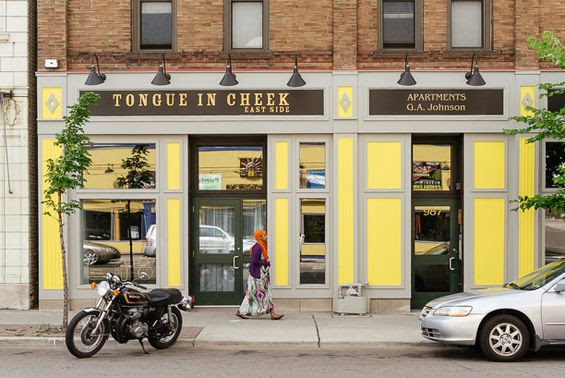 Tongue in Cheek East Side